How are your hops doing?: a Hop Club update

How are your hops doing?: a Hop Club update

It’s a few months now since members of this year’s inaugural Hop Club came into the Brewery to collect their hop rhizomes to take home and plant.  We recently got in touch with people to ask how they are going, and here is a selection of their responses:

Roger Easterbrook told us that he planted two, one in Totnes and one in Paignton.  His Totnes one failed, but his Paignton one is now flying, as the photo below shows: 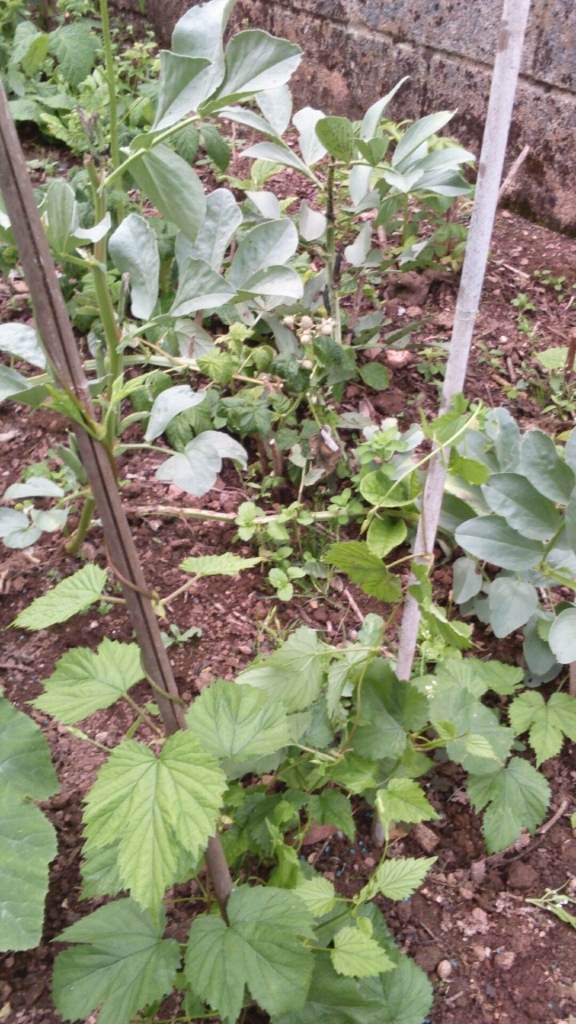 Erica Lewis told us that hers never appeared, due, she believes given the fenestrated state of the rest of her garden produce, to slugs devouring the initial shoots.

Chris and Susie planted theirs on their allotment, but they never came up at all.  We have heard a few stories of plants that just never came to life, we will discuss this with the supplier and hopefully rectify this in the Autumn when we invite a new round of members and order more plants.

In Dartington, Rob Hopkins found that one of his never appeared, but that the other, in a pot, is flying, as evidenced by this photo: 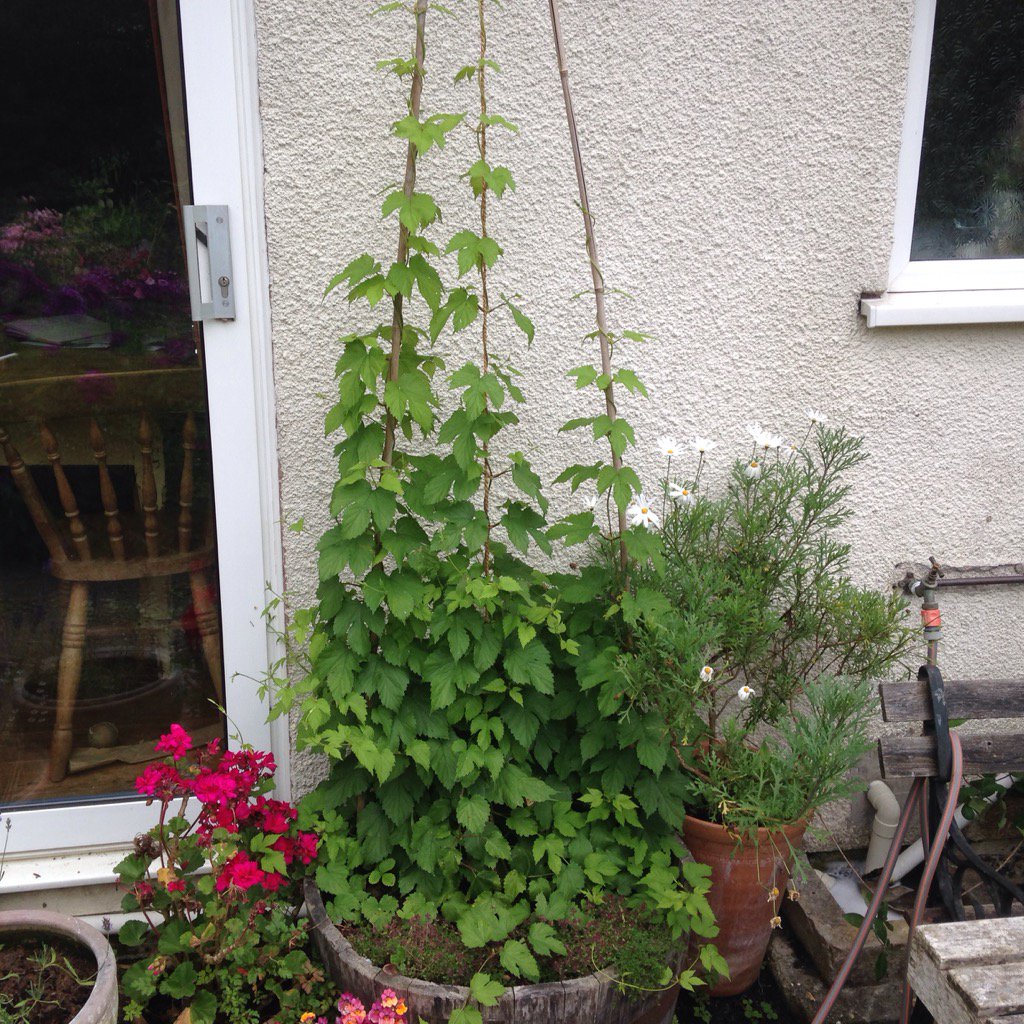 Brian writes that ” My rhizome is doing very well and has reached the top of the string.  Bit slow to Start but when it got going it was growing 2 inches a day”.  Here is his photo: 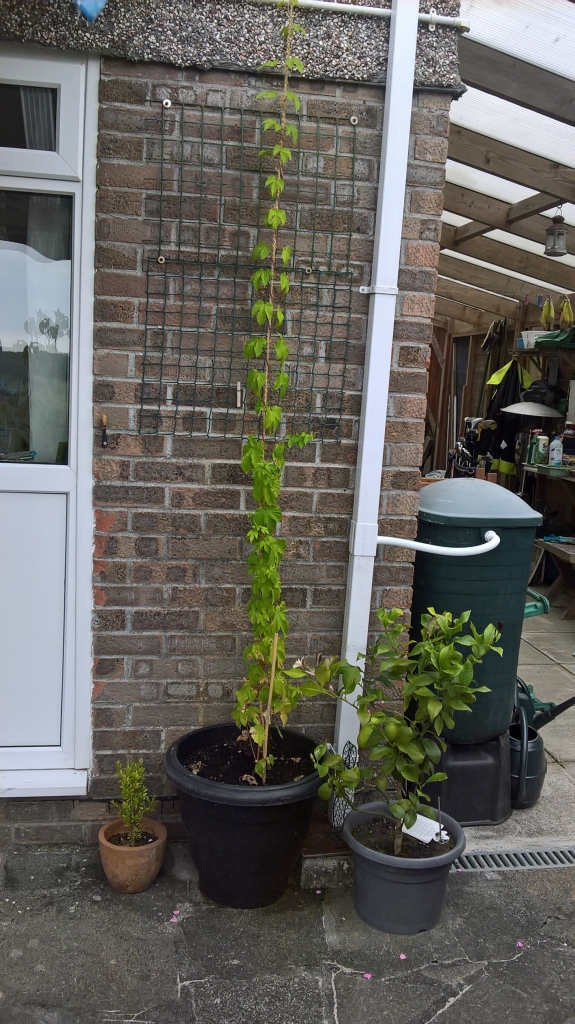 Chantelle Norton told us: “The one I gifted to my neighbour is rambling happily up his old apple tree and after a bit of a slow start, my Mum’s hop is also going well in a sheltered corner of their garden. She also has another hop variety growing – not sure if it would be any good for brewing or not, but I expect she’d give you some if you felt that it was worth an experiment.  Mine unfortunately did not survive being dug up multiple times by the neighbourhood cats. Will send you some photos of the successfully growing hop plants if I get the opportunity”.

Julian Wright wrote: “1.4m and counting…”, and sent the photo below: 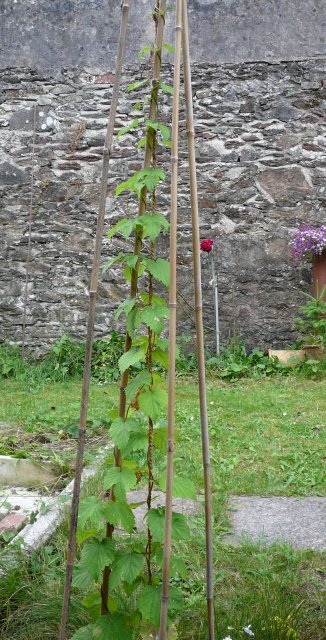 Richard Phillips in Bridgetown writes: “I had 2 rhizomes both planted at the same time. The RH one is now about 10 feet high with lots of side shoots, the LH one’s first shoot got eaten by slugs but it has had a second attempt and is now about 1 ft 6 in (see photo below). There appear to be some buds that I hope will turn into hop flowers”. 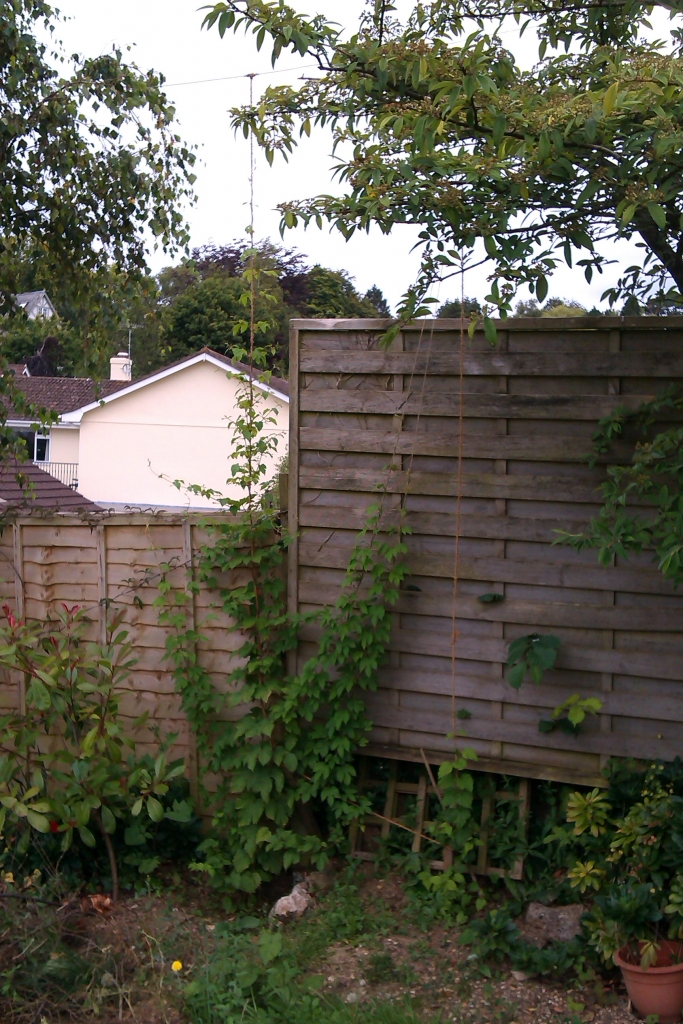 Bob Billington writes: “Here’s a couple of pics of the 3 hop plants I bought that are now planted in Sunny South Wales in Magor-2 in pots at my place, and one in a pot at my mate Chris’s place (I gave it to him as a birthday present). All three are growing well with plenty of foliage, but no buds yet-should there be any yet?” 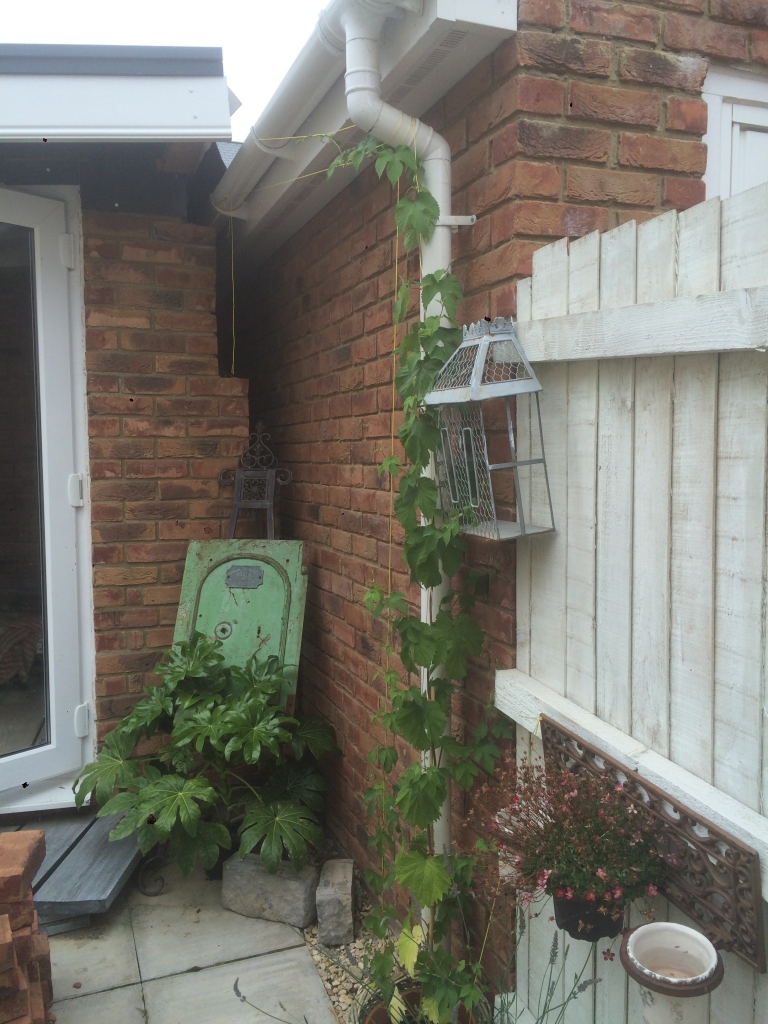 The hop plant at Chris’s house… 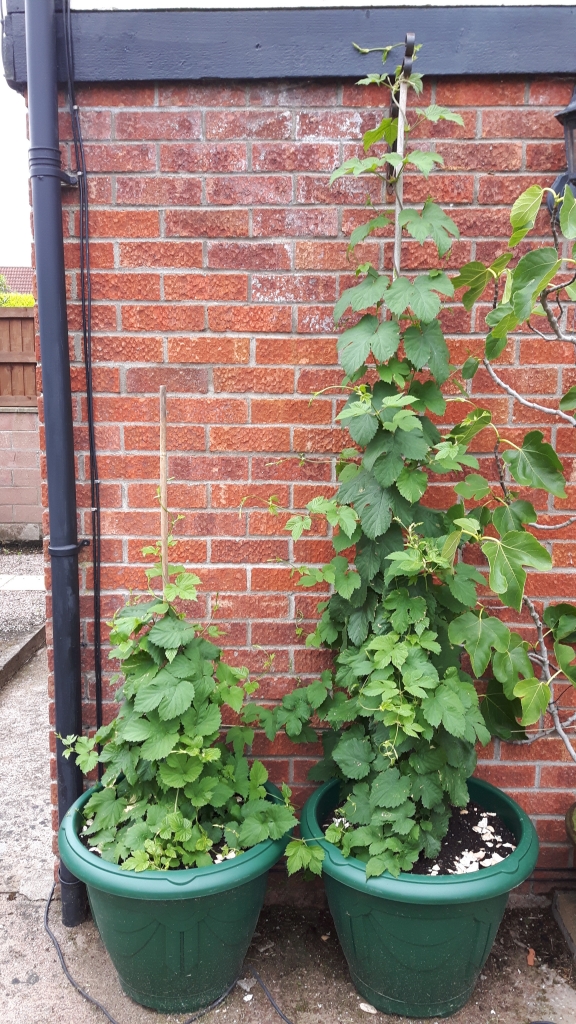 In terms of buds, you will see from the image at the very top of this page what is looks like when the beginnings of the hops start to emerge, so hopefully yours looks like that, or will very soon…

Ben Bryant told us “neither of my two plants/rhizomes showed any signs of life. I planted each one in a different place, with different soil and followed the instructions.  Oh well, perhaps they are establishing for next year when they will boom back. Ere’s hop-ping”.

Tigga Stainton wrote “unfortunately we were away for a week and somebody forgot to water them …….. so they were looking decidedly “faint” when we got home today. I am truly hoping that we have managed to resuscitate them”. 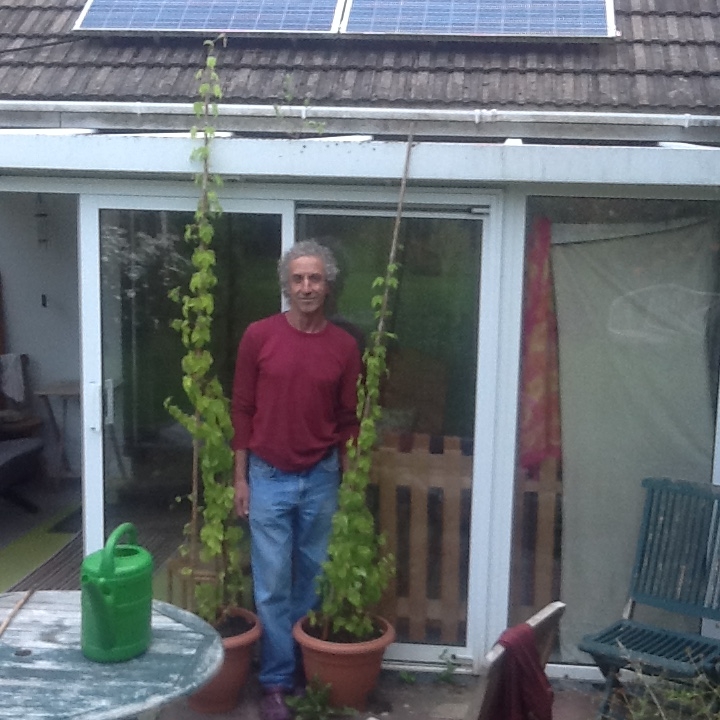 Nathan Carter‘s hops are off and running, as you can see in the photo below: 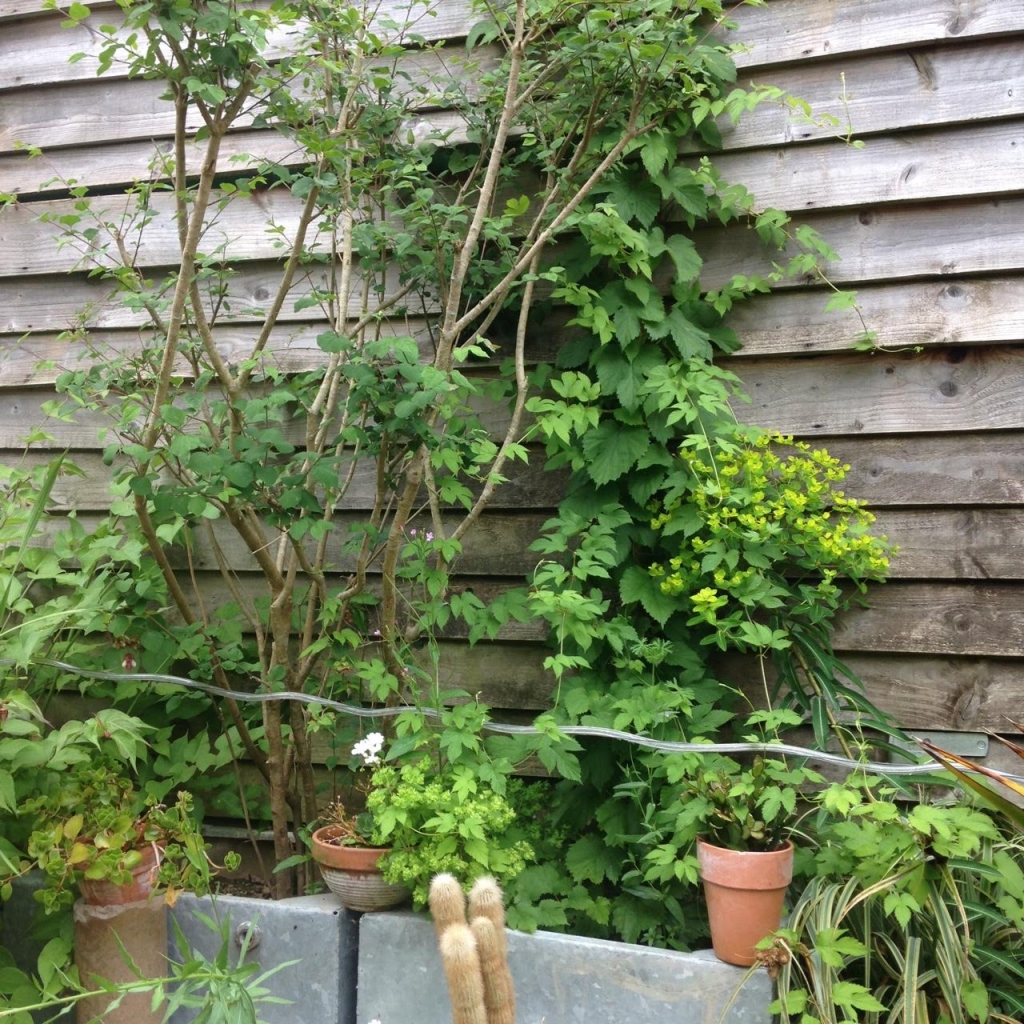 Thanks everyone.  Apologies to those whose didn’t come up, we hope to rectify this in our next orders in the Autumn.  For those whose are growing, exciting isn’t it?  We will keep you posted and hopefully get some hops over the next 6 weeks or so.  Happy growing!