In 1926, after three quarters of a century of brewing, The Lion Brewery in the heart of Totnes ceased trading. At its peak, this successful brewery owned 26 pubs and employed many local people. People far and wide celebrated its famous porter and its “celebrated Totnes Stout.”

In 2013, a passionate group of Totnesians brought that history back to life with the launch of New Lion Brewery, a business that once again began brewing award winning beers and boosting the local economy. New Lion Brewery began creating trial brews in temporary quarters in the autumn of 2013.  Over that winter, we built a new brewery from scratch on Station Road in Totnes and began brewing both our core range beers including TQ9s current favourite IPA, Pandit, as well as working with local businesses and community groups to create experimental and one-off beers like a pumpkin ale, a chilli beer, and a mushroom stout. Our fantastic beers won many awards and a strong local following.

In 2019 we proudly became the UKs first 100% community owned brewery when we successfully completed our ‘LionShare’ crowdfunder. We now have over 270 shareholders. That year we moved our brewery to a new home in Webbers Yard, Dartington where we also opened our first taproom.

In 2020 thanks to our LionShare shareholders we were able to move our brewery to a larger premises in Webbers Yard where we now brew our popular core range beers as well as our limited edition ‘White Label’ series range of innovative one off brews.

In 2021 we also moved our taproom to a larger premises at the nearby Meadowbrook Community Centre in Dartington.

Since opening, our taproom has become a ‘must visit’ destination, hosting a wide variety of events including performances from both local and national artists, taproom takeovers, comedy, beer tastings, LGBTQ+ nights, craft sessions and much more while serving the widest range of quality beers (including our own!) available in the area.

Our business model is based on community, innovation and sustainability and New Lion Brewery has created employment for numerous local people including apprenticeship opportunities, attracted visitors to the area, supported community groups, artists and causes and boosted the resilience of the local economy all thanks to our wonderful New Lion Brewery community and beers that we believe capture what can truly be described as “Totnes and Dartington in a bottle.”

If you would like to get involved, sign up below for our newsletter.  If you want more information, the contact page tells you how to reach us.  We want to hear from you!! 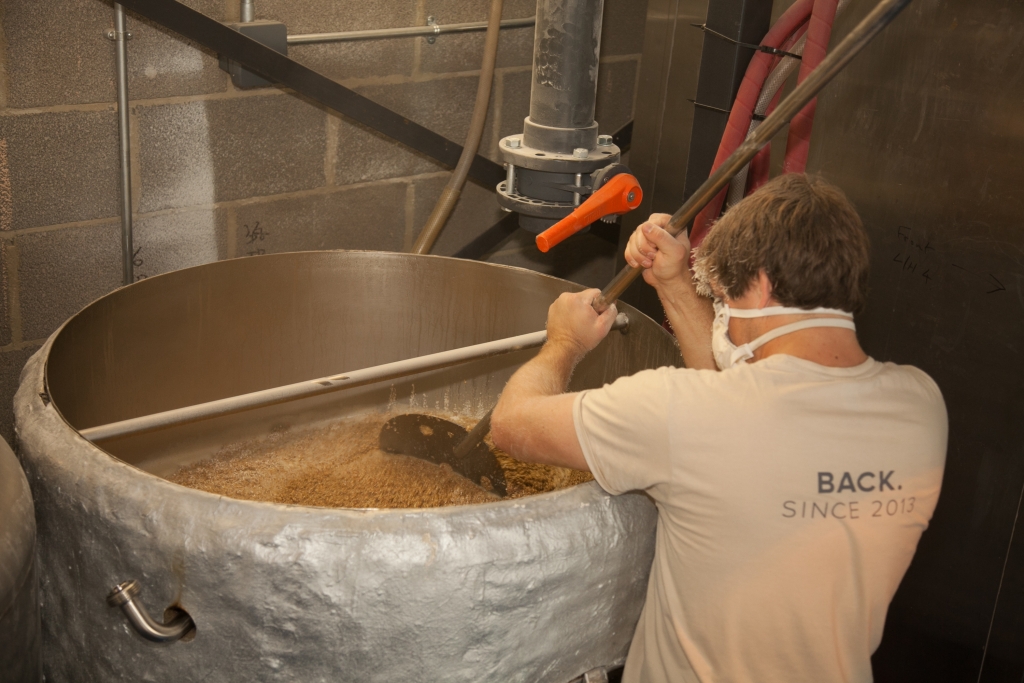 Head Brewer Mat mashing in a batch of Mane Event.